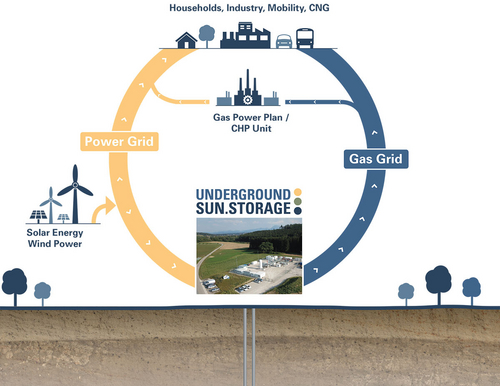 Wind + Sun = Gas
This is the equation behind power to gas, an innovative technology that forms the basis for the Underground Sun Storage research project.

Power to gas could hold the key to affordable transportation and storage of large quantities of solar and wind energy, making it available around the clock. Some­times the wind does not blow or the sun goes in, while at other times surplus power is produced. For their share of the energy mix to keep on growing over the long term, renewables need a means of compensating for fluctuations in output.

Intermittent renewable electricity output is not the only problem. Something will also have to be done with all the excess power generated by giant wind and solar parks at times when demand is low. This surplus energy needs to be stored so that it can be made available during peak periods. If we want 100 percent of the electricity generated in Austria to come from renewable sources, we will need storage with capacity over 100 times greater than the potential offered by pumped storage. (Source: Vienna University of Technology, ESEA/EA (ed.): ‘Super-4-Micro-Grid’, research project final report, Vienna 2011). The combined capacity of pumped storage plants and battery storage used to date is far from sufficient. Additionally, such facilities can only release electricity. The answer is gas. Besides power generation, it can also be used for heating, in vehicles and as a raw material. The gas transportation and storage infrastructure in place has all the makings of a storage system for green power.

Secure, long-term energy supplies that are economically viable, environmentally sustainable and socially responsible are a high priority on the European political agenda, as is reducing the continually growing dependency on energy imports.

Energy companies and research institutes in Austria and Germany are working flat out on new approaches to large-scale electricity storage. The power to gas strategy is particularly promising. This involves converting renewable electricity into gas and using existing gas infrastructure to transport and store it.

The principle behind this new, environmentally friendly technology could hardly be simpler. Surplus solar and wind power is used to split water into oxygen and hydrogen by means of electrolysis. The hydrogen can then be stored for later use, for example as primary energy in fuel cells. But a further step is also possible: in methanation, the hydrogen is reacted with carbon dioxide (CO2). The CO2 can be drawn from the atmosphere or it can come from a biogas or industrial plant. The product of the process is renewable synthetic natural gas.

Methane is the main constituent of natural gas, making up as much as 98% of its content. It can be injected into the gas grid and used in the same way as conventional natural gas to fuel domestic space, for water heating and industrial processes, as a renewable fuel for gas-powered vehicles, or alternatively for gas-fired electricity generation. The process gives rise to no emissions apart from the oxygen released when the water is split. Today the efficiency of the conversion process is already about 60% – a big step forward in view of the fact that surplus electricity is often not used at all owing to the lack of storage capacity, and instead wind turbines are idled or whole wind farms taken off the grid. If the hydrogen can be used directly, the efficiency rate is even higher.

“Europe is committed to renewables, but we need reliable energy supplies around the clock. Gas can pull that off. Cutting edge power to gas technology has the potential to make transporting and storing solar and wind energy affordable, which would make them constantly available. The infrastructure is already in place – we have the pipelines and storage facilities to do the job.”
Markus Mitteregger, Chief Executive Officer, RAG

Thanks to electrolysis and methanation, electricity can be converted into hydrogen and into natural gas, making large-scale power storage possible for the first time. The process solves one of the biggest problems posed by electricity storage – shortage of space. It means we can simply turn to existing natural gas infrastructure, in the shape of the pipeline grid and large storage facilities. Instead of developing and rolling out expensive and elaborate new storage technologies, the power would be transformed into synthetic natural gas and stored in depleted gas reservoirs. 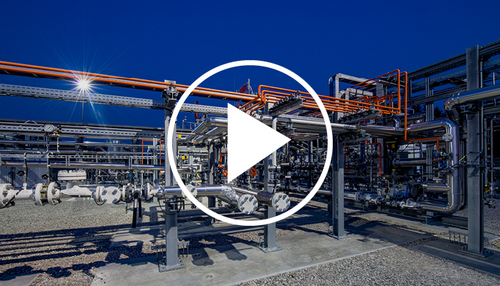